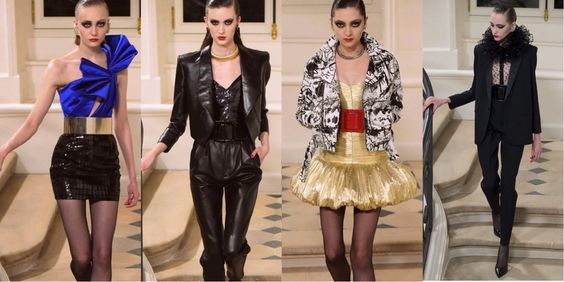 Let’s travel back in time to the 80s where music was better and auto tune was non-existent. Hedi Slimane debuted his first couture collection for Saint Laurent at L’Hotel Senecterre in Paris on Monday evening. It was such an exciting feeling as if you are about to be part of history. When you are as much of a fashion lover as me, then you can’t help but lose your mind in the wonders of this fall collection.  His ready-to-wear presentation was so unique and completely out of this world. The audience sat in amazement as “La Collection de Paris “with flashy, one shoulder dresses straight out of a cool prom scene – but with the designer’s signature rock ‘n’ roll extinct that wasn’t hard to miss.

There she goes, the queen of the biker-girl gang. Forget about grunge (for now)-this fall’s reworked leather looks suggests a fashion heroine gone bad. Power up another gear; it’s the triumphant moto details that mark out the new leader of the pack. Saint Laurent emblazons a series of cult favourites that will have us massively addicted. In addition to sparkle and shine, the show was sprinkled with a dash of a few more surprises. Saint Laurent is famous for sticking to his roots and being different. When it comes to the heritage of the brand, you can defiantly count on seeing classic looks mixed with a modern and chic vibe.

Carefully and with ease, I’ve rounded up five important facts for your very own Saint Laurent fashion cheat sheet.

1) Hedi Slimane debuted his first couture collection- The royal-style runway was elegant and so deifying, as models descended down a marble staircase while clutching the stunning banister. This was the perfect way for creative director Hedi Slimane’s coming out as a couture designer for the fashion house. The collection’s fall season was the first for Slimane’s since coming on board with the brand in 2012. This is the brands first couture show since 2002 and one of the best I might add. 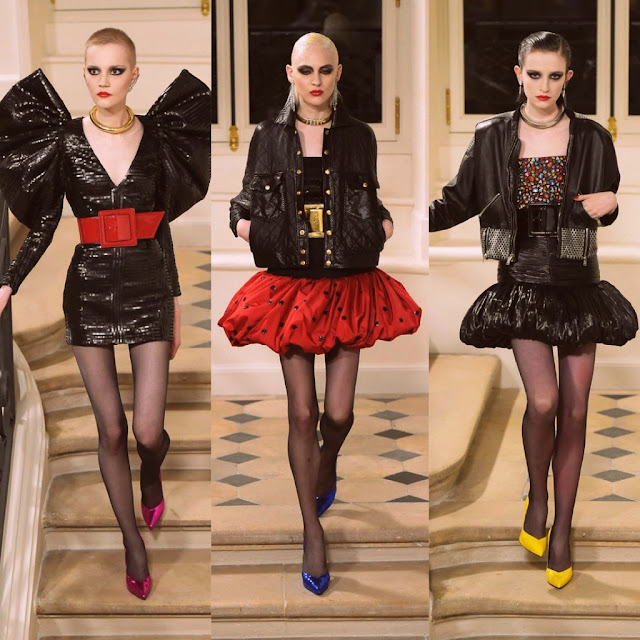 2) Is he leaving or not- Speaking of Slimane, he did not announce a departure. When Saint Laurent revealed for its Fall 2016 season it would be showing the collection in two parts-with one lovely presentation in LA, and one in Paris. The streets were talking and this had people predicting the stunt’s grand finale would be in a form of a departure announcement for Slimane. I don’t care for rumours personally, but it went as far as to speak on his replacement, eyeing Versace’s Anthony Vaccrello for the role. Unfortunately, Slimane has not made a formal announcement at least not yet. I personally hope he doesn’t leave the house since his vision is a complete masterpiece in motion.

3) No music please- Normally when you attend a catwalk show killer music is always part of the menu. Laurent for the 80s show decided to go on a diet and instead had the intimate space silent except for the voice of Bénédicte de Ginestous, who called out the number of each look in both French and English, as he had for the original designer's shows from 1977 to 2002.The style was an homage to the tradition of haute couture shows of the past, and also a complete 180° of what you originally expect coming from a rocker themed collection.


4) One you go black- Throughout the entire show you couldn’t help but feast your eyes on the bright coloured coats and shiny blazed dresses. What really caught everyone’s stylish eye was a large number of black in the collection. On more than one occasion black can have this sort of stigma, either you are about to attend a funeral or you wish to make yourself seem thinner. Honestly, all those perceptions of black are so wrong. In reality black can be served as a classic look that has been around for centuries. The black fitted silhouettes are quite iconic with a debut of straight laced sophistication that was hard to miss. I know most people are fond of colour and bright styles but the black in this collection was mixed with red, pink, yellow, and of course sparkling metallic.

5) The show took place at L'Hotel Senecterre- This decision was made in 2013 by Hedi Slimane who chose the iconic hotel as the new home for the couture line. It took more than over a year to get the 17th century mansion and garden space ready for today’s show. What better way than to get the true high fashion experience then seeing the show in Paris! I know London, New York, and Italy, have incredible collections that are priceless, but you can’t have a true couture show experience without traveling to Paris, it is like being in another world.


So many brands are really amazing but I must confess that none can compare to the sleek and genius style that is Saint Laurent. After seeing this show, this brand has become my number one favourite designer of all time. Some designers have been losing the heritage that made them famous. What Hedi Slimane has done with the iconic brand is keep the originality and not fall victim to constantly throwing out trends. Instead the designer takes the bold factor and throws it in our faces with the coolest style ever.