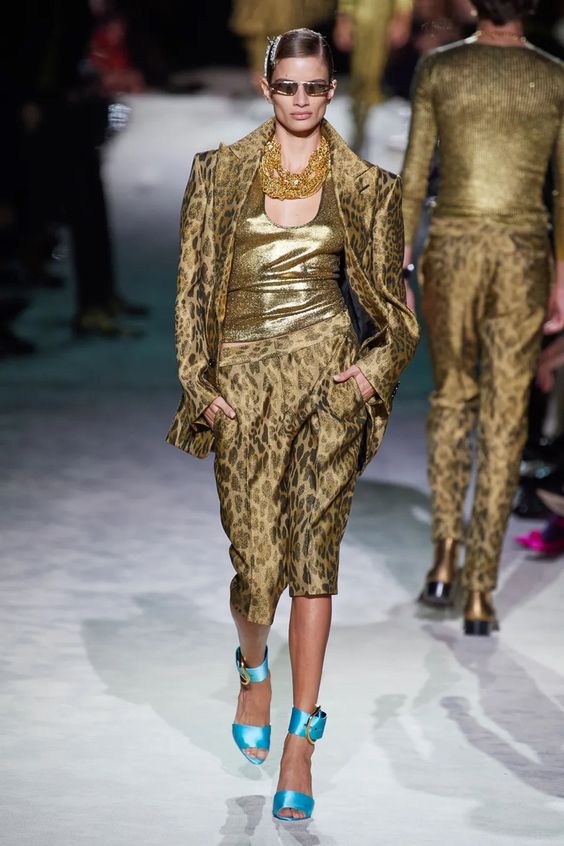 The champagne was flowing and slick as cool tempted ice, while the front row of the star studded night was light on fire as Tom Ford closed New York Fashion Week at Lincoln Center with a mind-blowing collection filled with hopeful, glitzy, electric glam. It was a complete epic adventure as guests were treated to a great beat at the beginning of the show, to a huge charge of chicness with the first look strutting on the catwalk.

The designers 120 guests-mandatory masks on for safety protocols were seated on long, soft white couches at the David H. Koch Theater as Ford’s models walked in capris and jacket sets of electric blue and pink, purple sequin party looks and embellished gold crop jackets-some all at the same time as his soundtrack to the show pushed the party along. 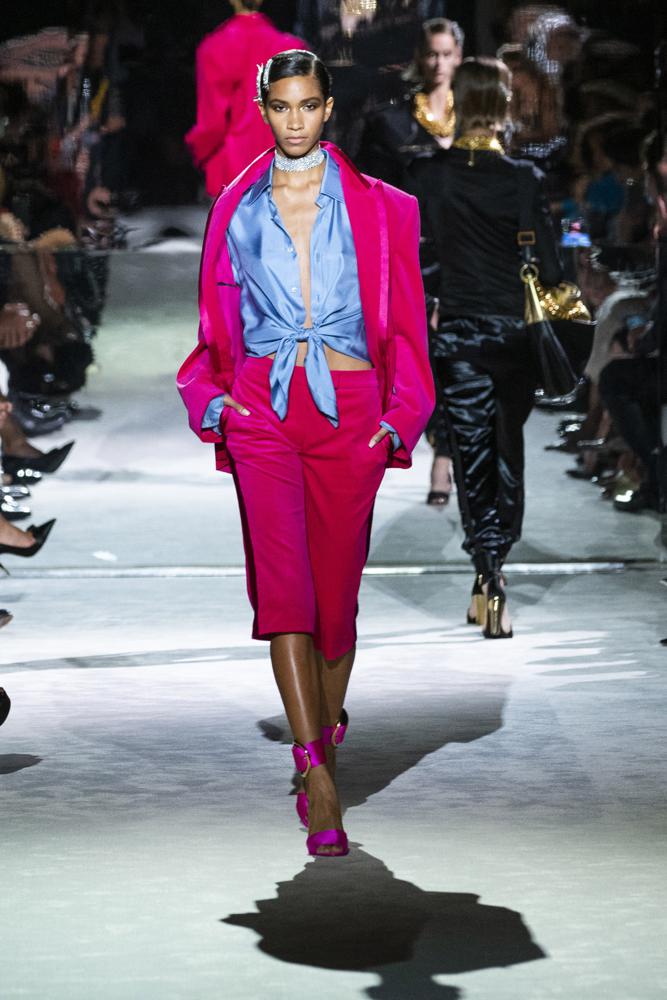 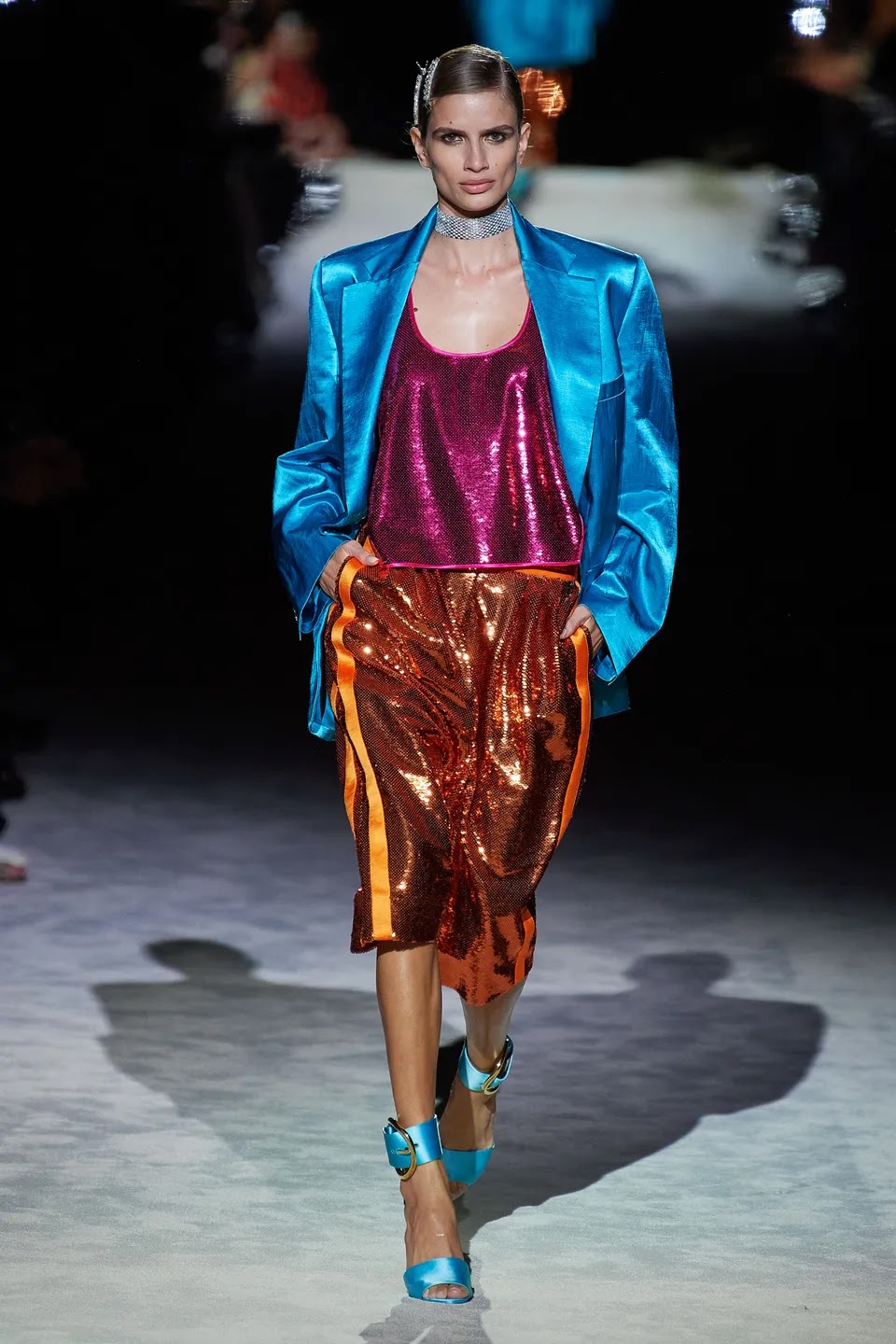 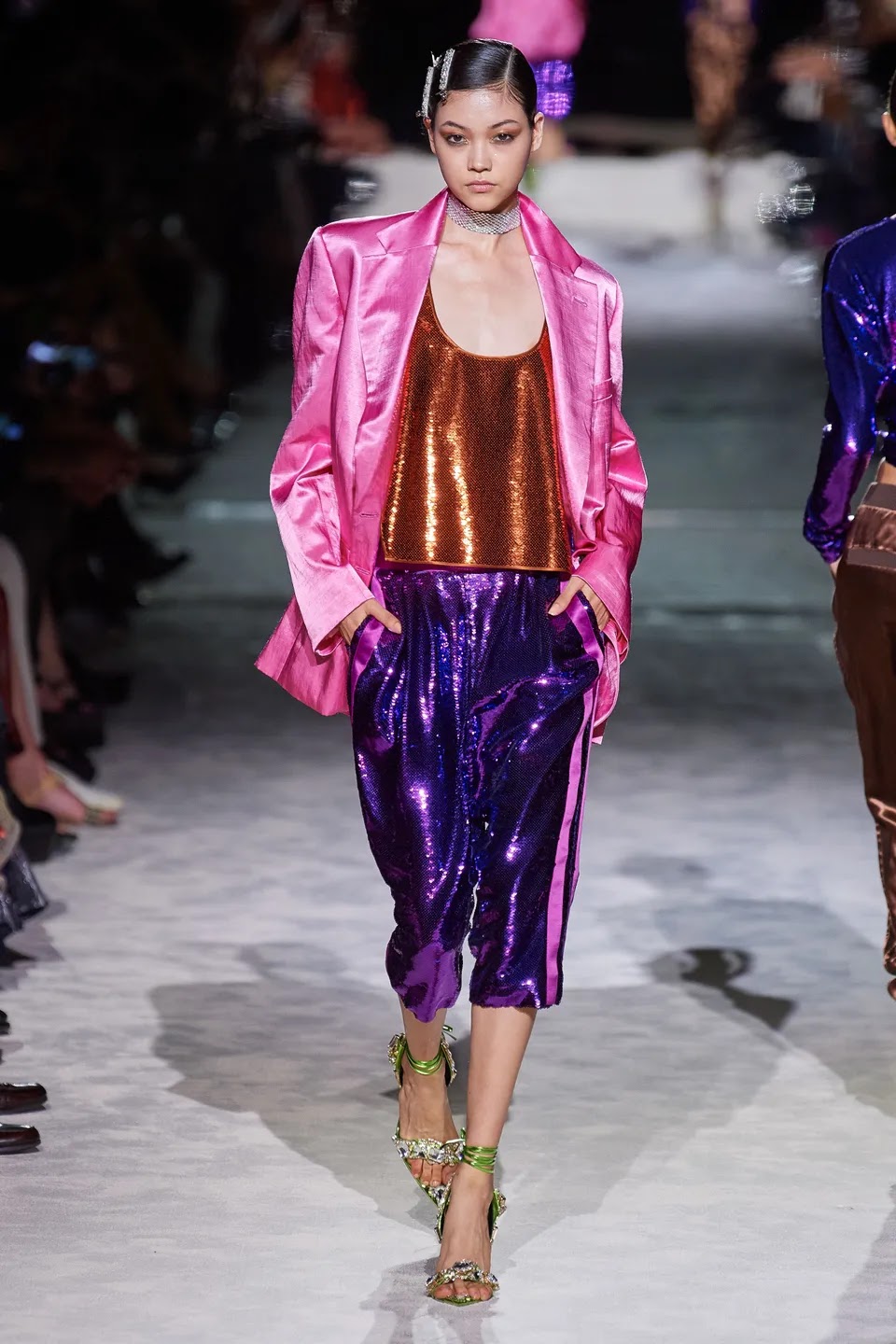 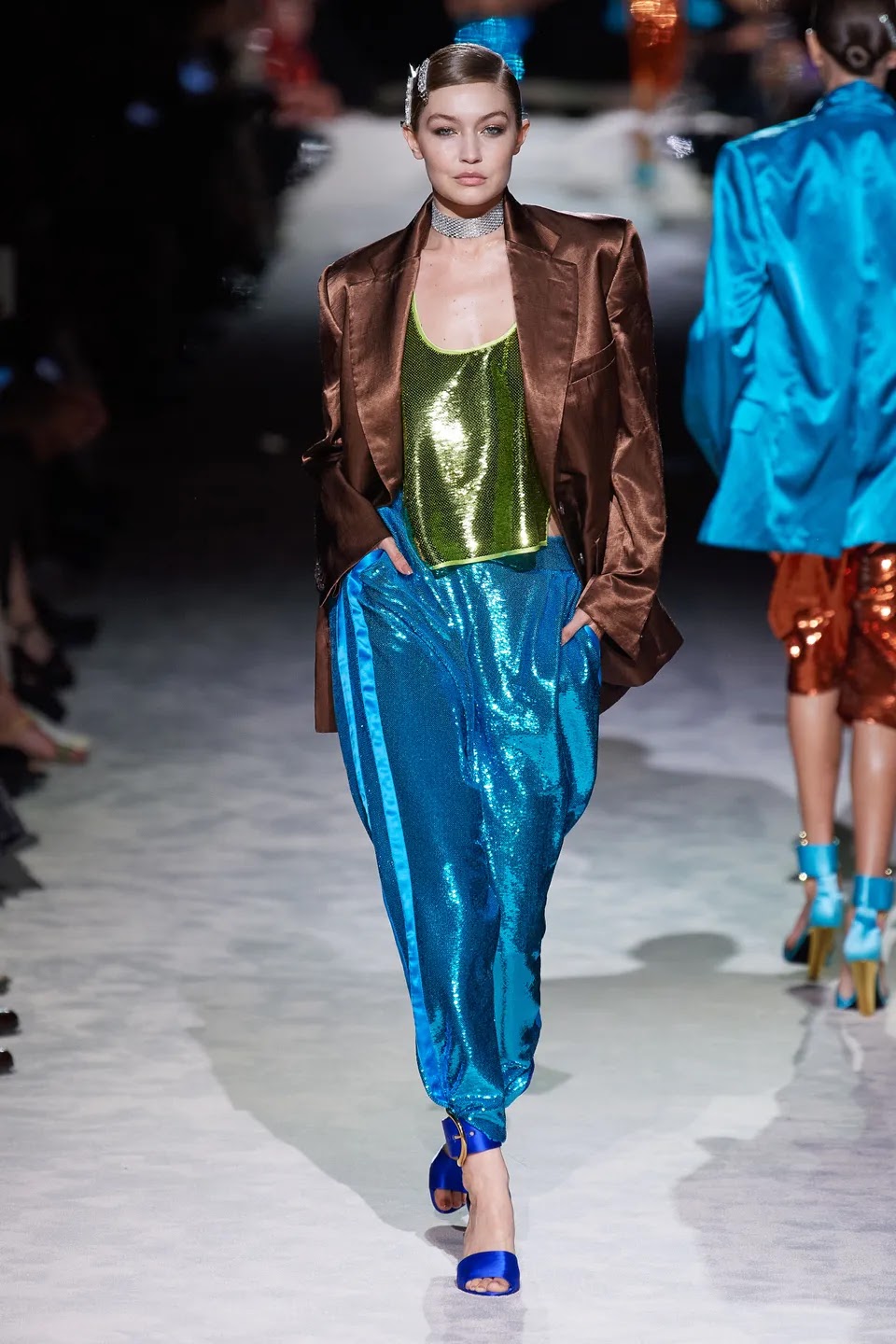 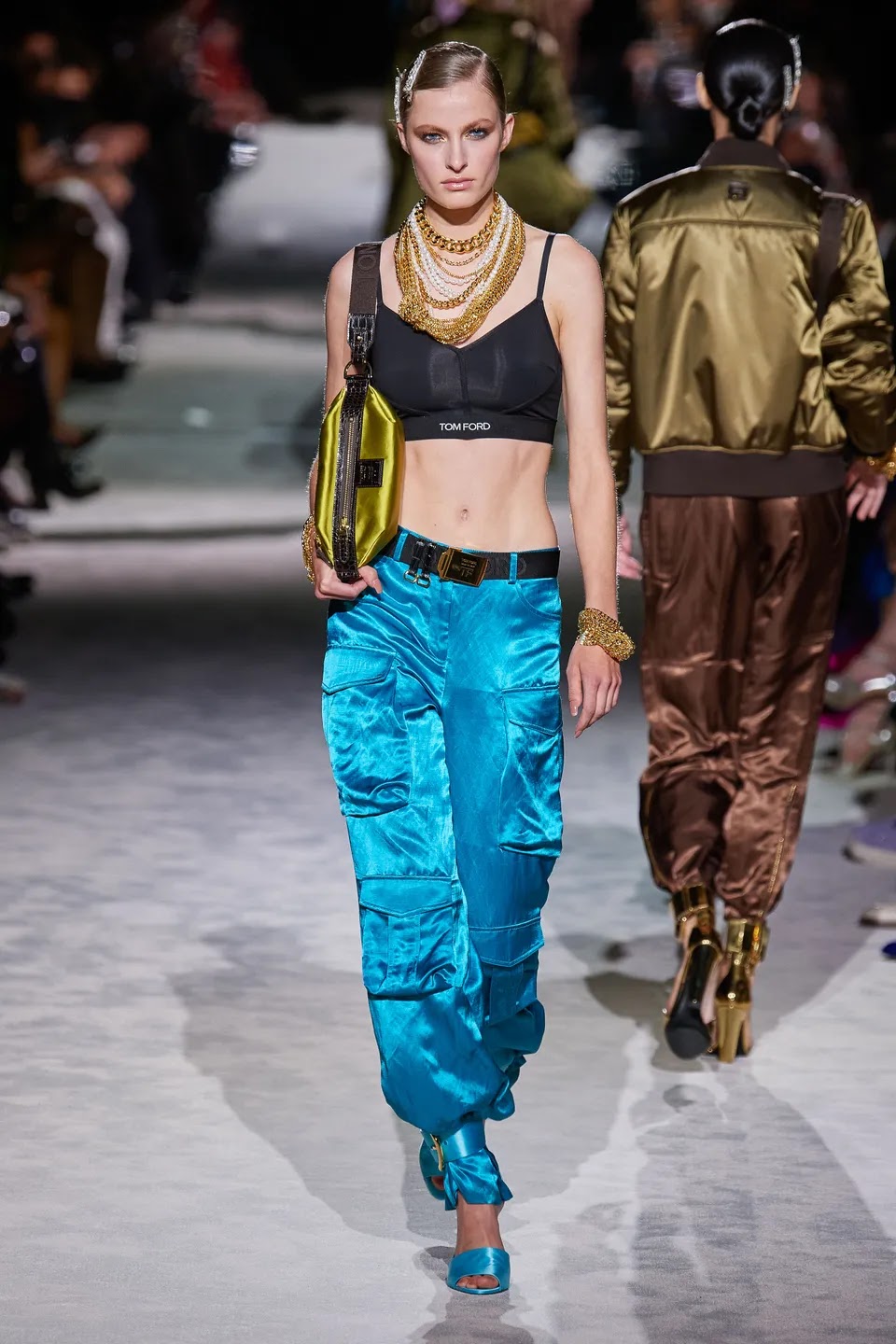 Ford, in his show notes, called the splashy show off a sporty evening colour the “90s take off the 70s” that evokes the glossy casual vibe of Los Angeles, where he lives.

“It’s almost an airbrushed kind of beauty that starts to permeate the mind,” he said. When discussing the collection, he described it as “simple in cut but not in impact.”

The timing was prescient. Ath-lingerie, you might call it, has been a big trend this week, including on the runway of LaQuan Smith, who was sitting in Ford’s front row. It’s part of fashion’s ’90s love fest, and Ford was the O.G. of that era. So the silky cargo pants, cropped tie-front sequin tops and basketball shorts, and “Tom Ford” logo bra tops he showed should have a special kind of street cred. 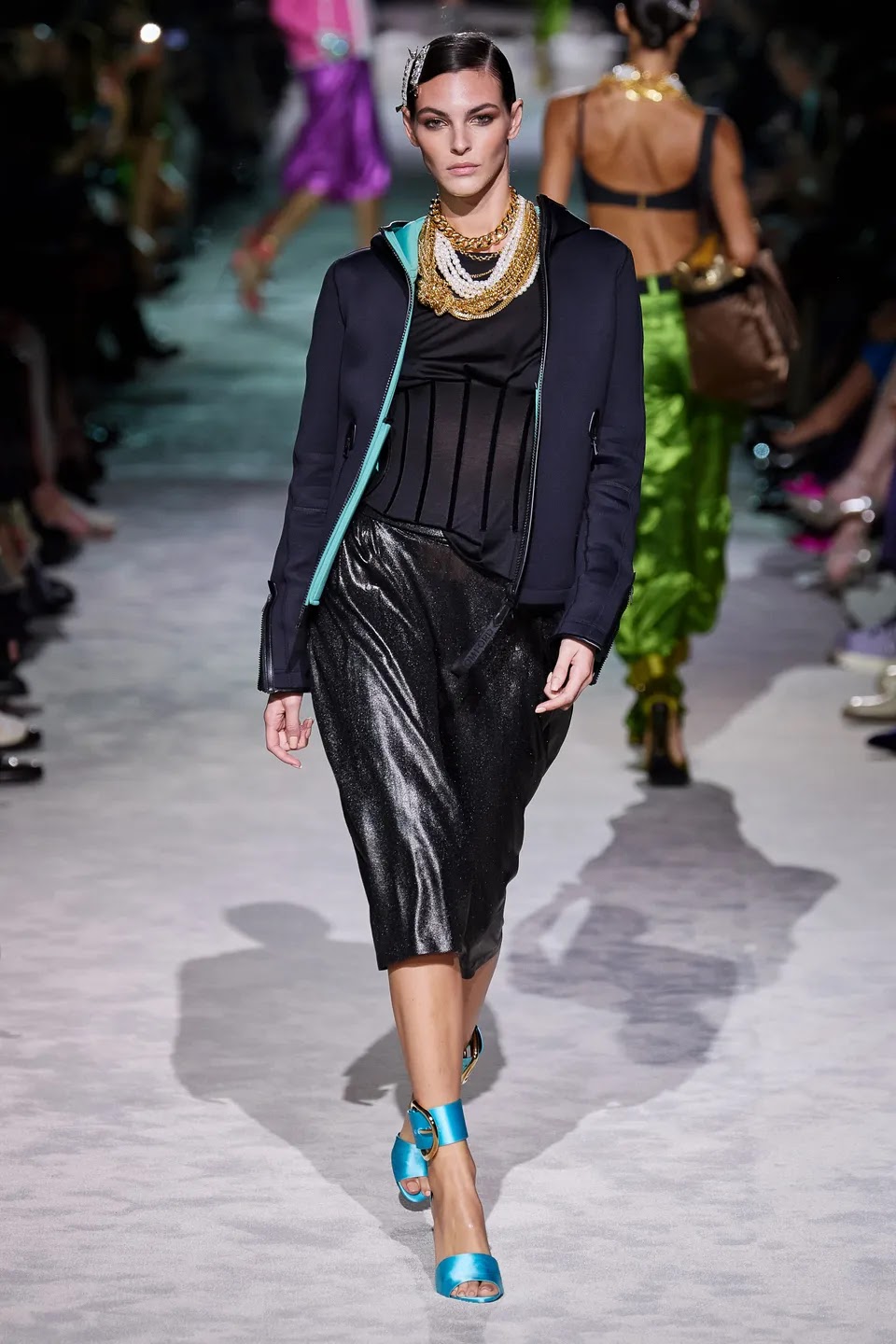 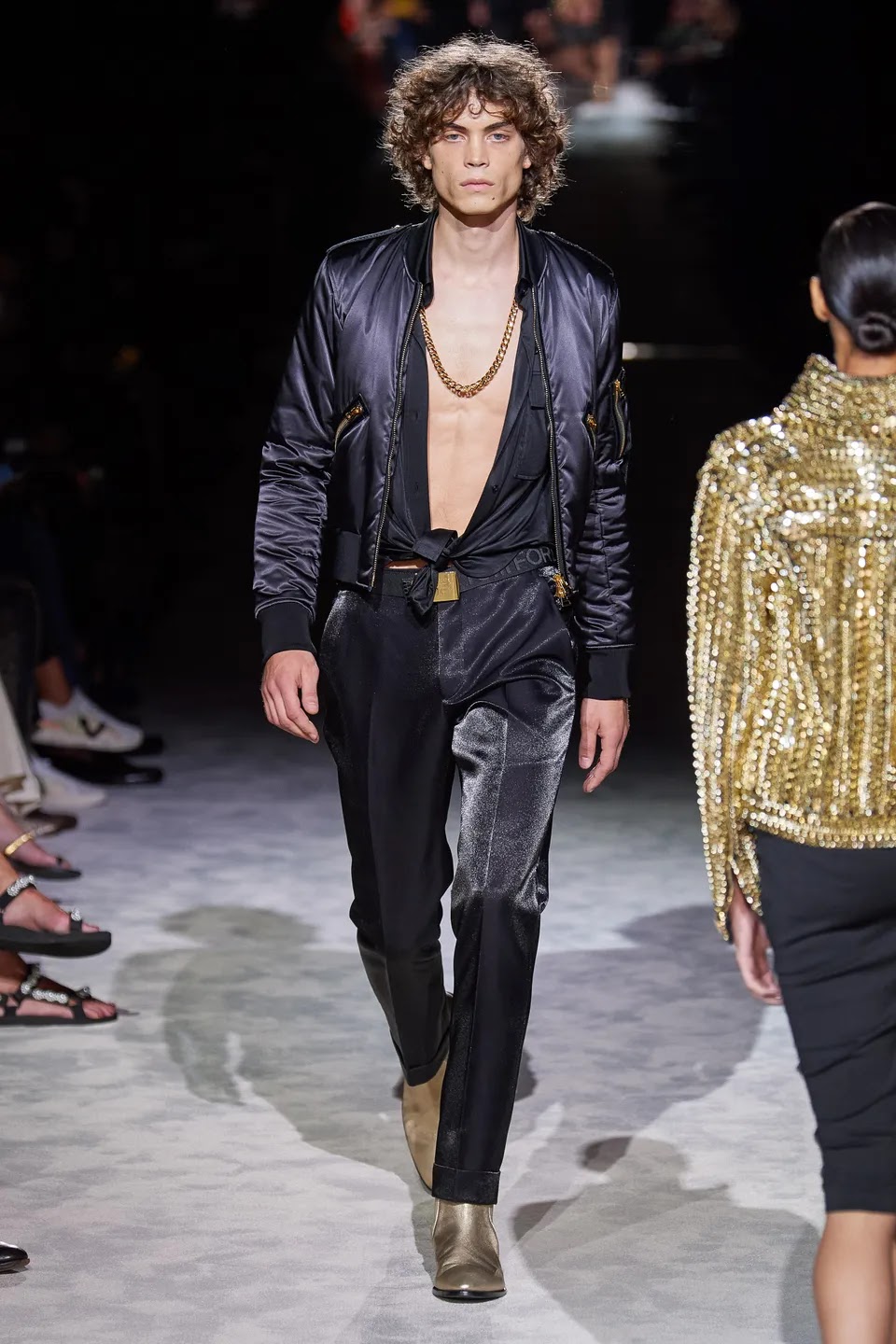 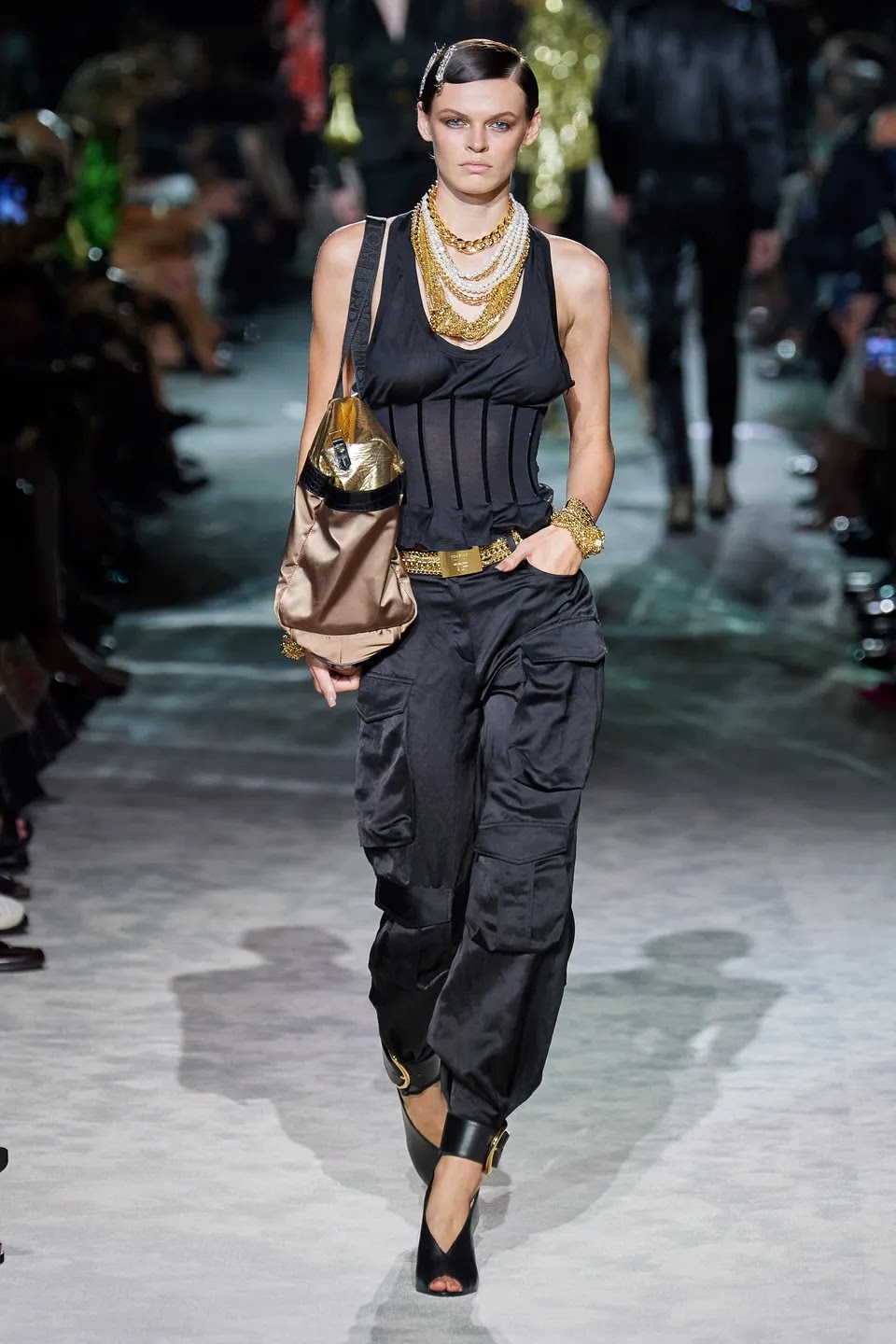 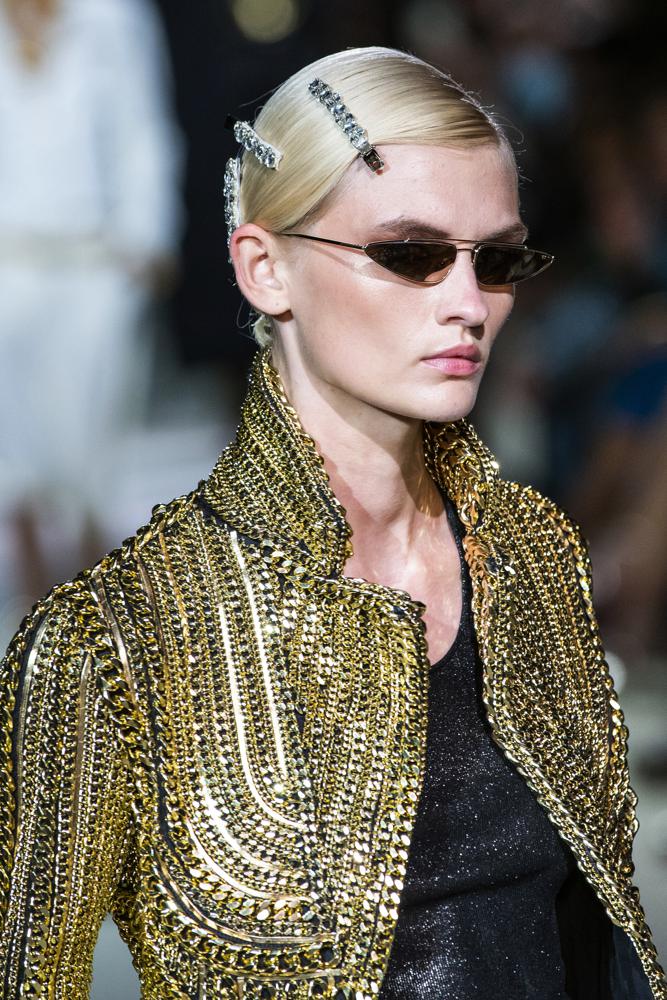 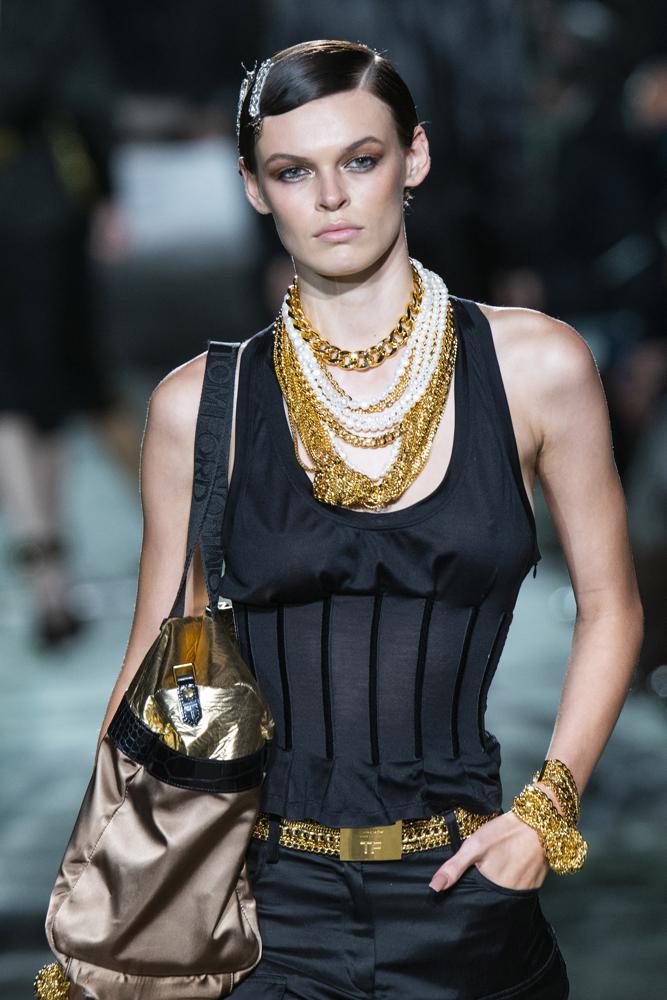 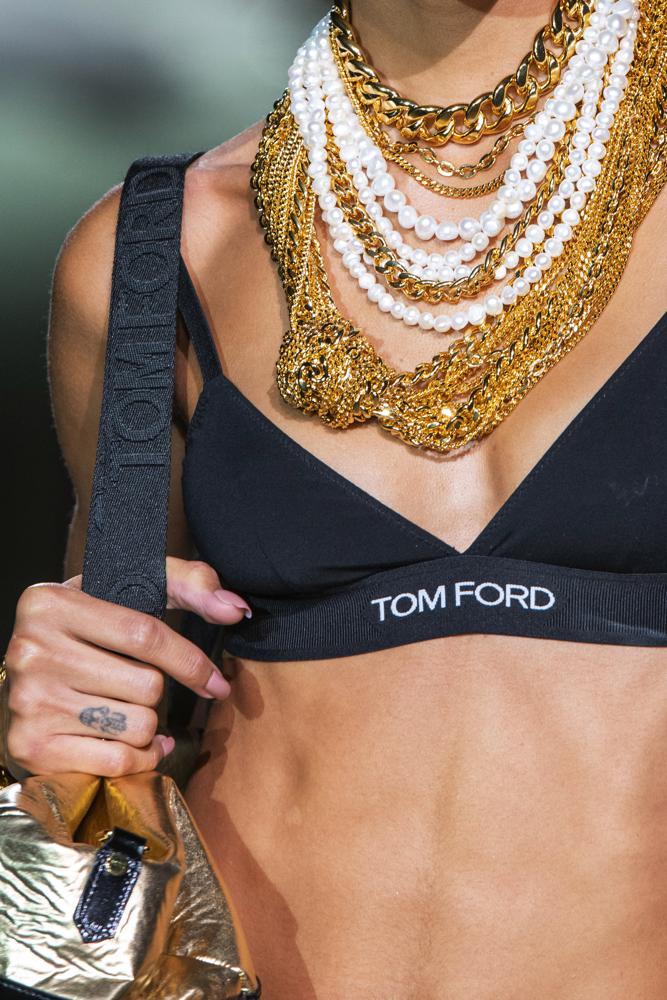 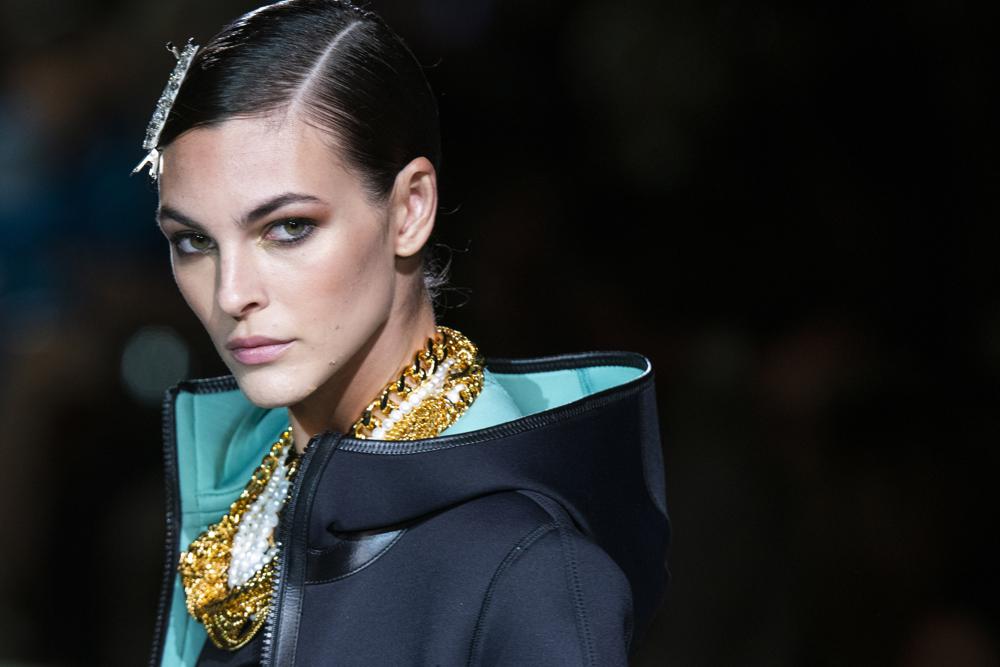 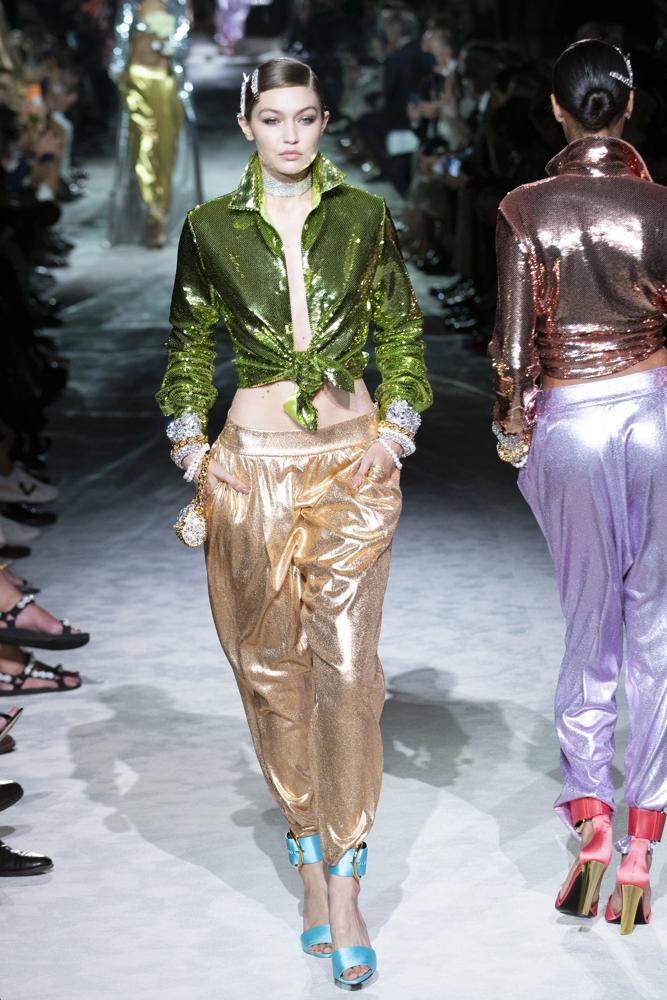 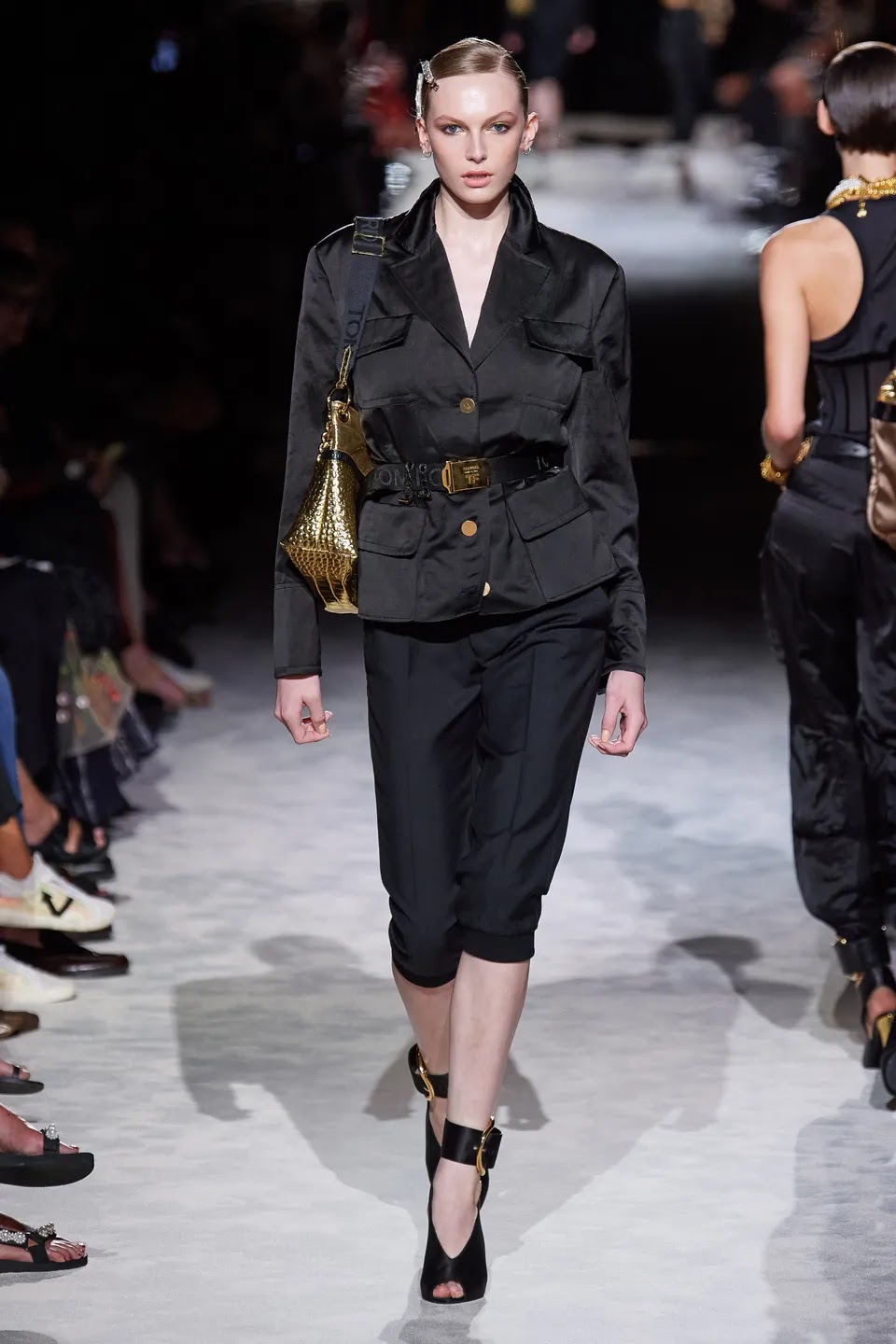 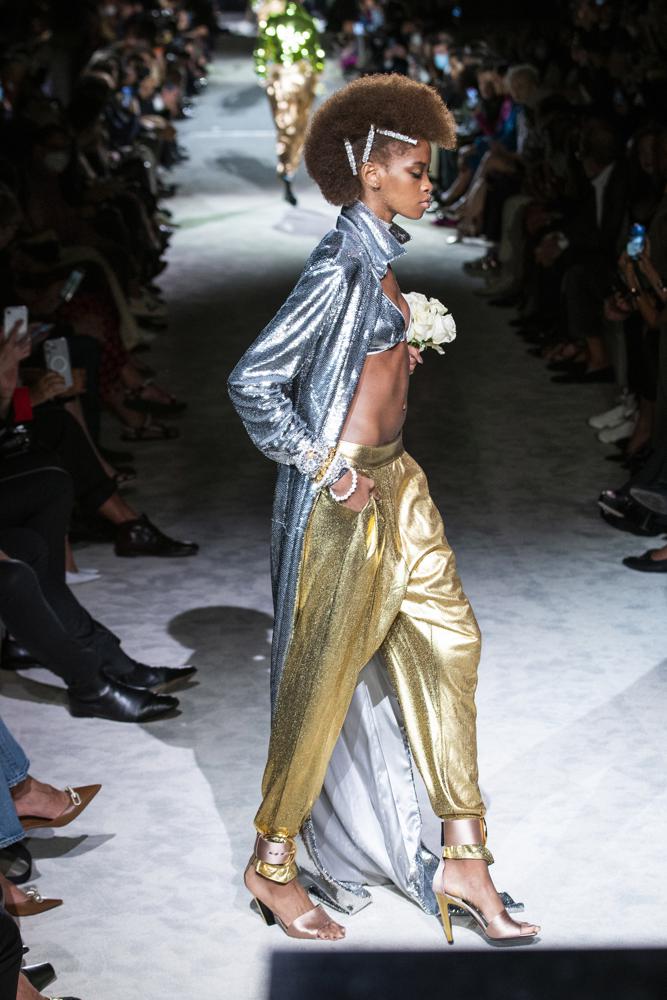 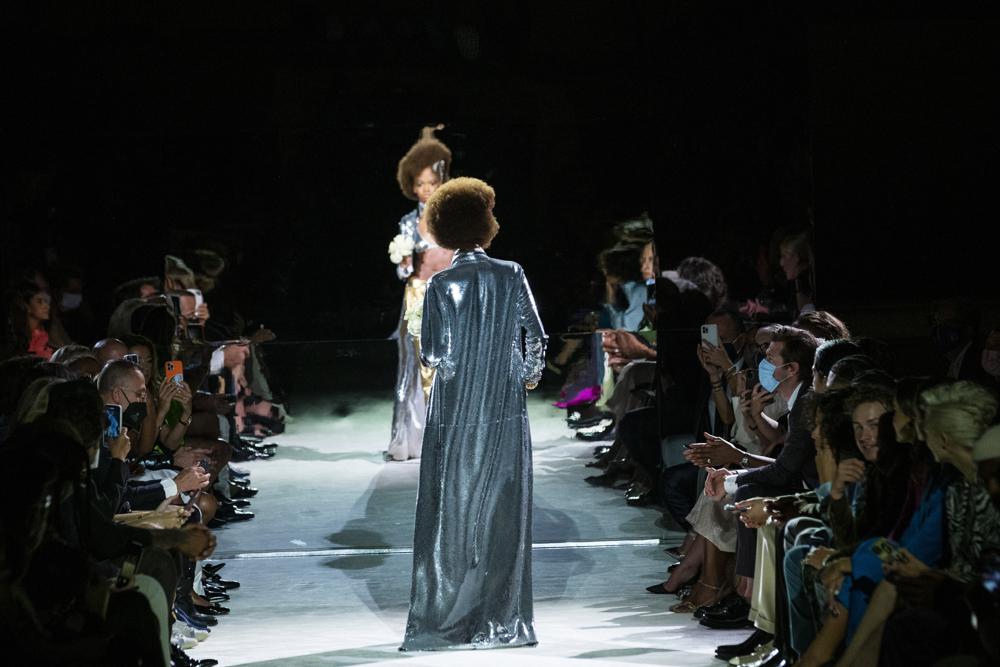 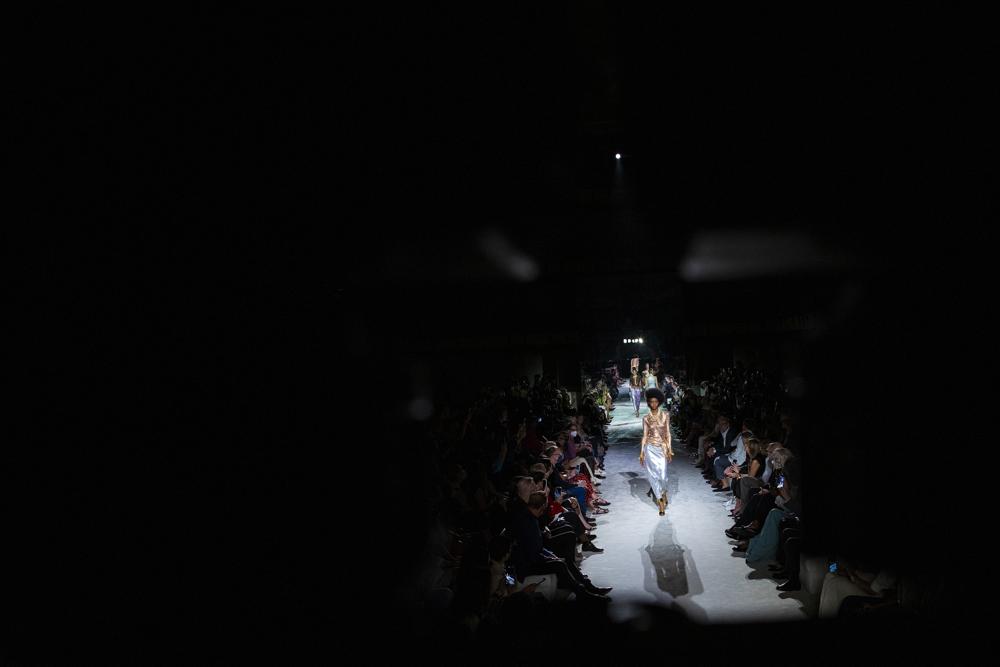 He also reclaimed the iconic red velvet suit he designed 25 years ago at Gucci. Famously worn by Gwyneth Paltrow to the MTV Video Awards in 1996, the suit turned up in April in Alessandro Michele’s runway show celebrating Gucci’s 100-year anniversary. Ford altered it with a different cut and shorts, giving it a sexy new currency.

As for the chunky gold chains on early hip-hop stars and ’90s fashion runways, Ford brought those back, too. In addition to gold chain necklaces, cuffs and sculptural stiletto heels, he used them as embellishment on status denim jackets embroidered all over with tiny gold chains. They looked fresh and oh so good.

The last several looks were that of a goldmine, in fact, the gold leopard print really grabbed my attention and stood out to me particularly throughout his collection. It just looks so modern, yet gives a nod to that 90s glamour and added sex appeal while being cool and relaxed at the same time.

Most of Tom Ford’s shows throughout his whole career have been down right sexy and used fashionable controversy to make a splash.

But when it comes to his closing collection for NYFW22, it defiantly had a lasting impact.

One you could defiantly sense in the building even after the show was over. It is completely amazing and unforgettable.

*All photos are from Tom Ford's SS22 Collection.

What did you think of Tom Ford’s NYFW22 collection?